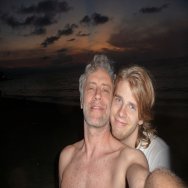 In LGBT culture, a “daddy” is a slang expression referring to someone who is an older man – but with particular accompanying reference to a younger gay male “son” (“boy” or “boi”); this is a sexualised intimate-relationship – specifically acting out emotional & non-sexually intimate aspects of father/son relationships but also often (but not always) including sex as part of the intimacy.

There is an important distinction about dad/son relationships – that the “dad” and “son” are not actually related to each other (i.e. this is not incest) and it’s not necessary for the partners to be of a particularly defined age range other than there is either a distinct age difference (for example, the partners might be 20 & 45 in age, or 40 & 60 in age etc), or that the partners are able to fulfil a type-role (one partner is fatherly, the other is youthful).

This is a kind of symbiotic relationship – both gay males are getting something out of this relationship.

Dad/son relationships can be a healthy form of acting-out that which has been lost (or longed for) in other relationships.  The “dad” may have not had the opportunity to parent or mentor someone and finds pleasure in using his experience and learning to pass on helpful knowledge to the “son”.  The “son” may not have had very good parenting and lacks the safe containment that a parent should bring to a child, and so enjoys the safety and containment that can be found from the “dad”.

This can be a form of reparation (repairing past experiences with safer, more nurturing current ones) or replacement.

Whilst dad/son partnerships may be different in physically age: ten, twenty, or more years older, it is interesting to compare their physical and gay ages – sometimes finding similarities as a source of the relationship “match”.

Dad/Son relationships can struggle with intimacy-conflicts just like any other relationship.   The more successful dad/son gay couples continue to work well by either:-

GayCoupleCounselling.com welcome any form of gay, lesbian, bisexual or transgender relationship for counselling.  If you and your partner are finding your relationship’s conflicts are difficult to work through by yourselves, invite us to lend a hand.